Despite a 32% devaluation why are the Pakistani exports not increasing?

Answer: Because everyone is either corrupt or incompetent, but now this ‘Change (Tabdeeli)’ and ‘Drive-of-Accountability’ will soon put everything right – Please have patience!

On a more serious note, the thing is that this is yet another policy misjudgment by the PTI government where it is apparent that it hadn’t done its homework before assuming office. So once again, a process of learning on the job through trial and error and needless to say that once again it costs the Pak economy dearly. 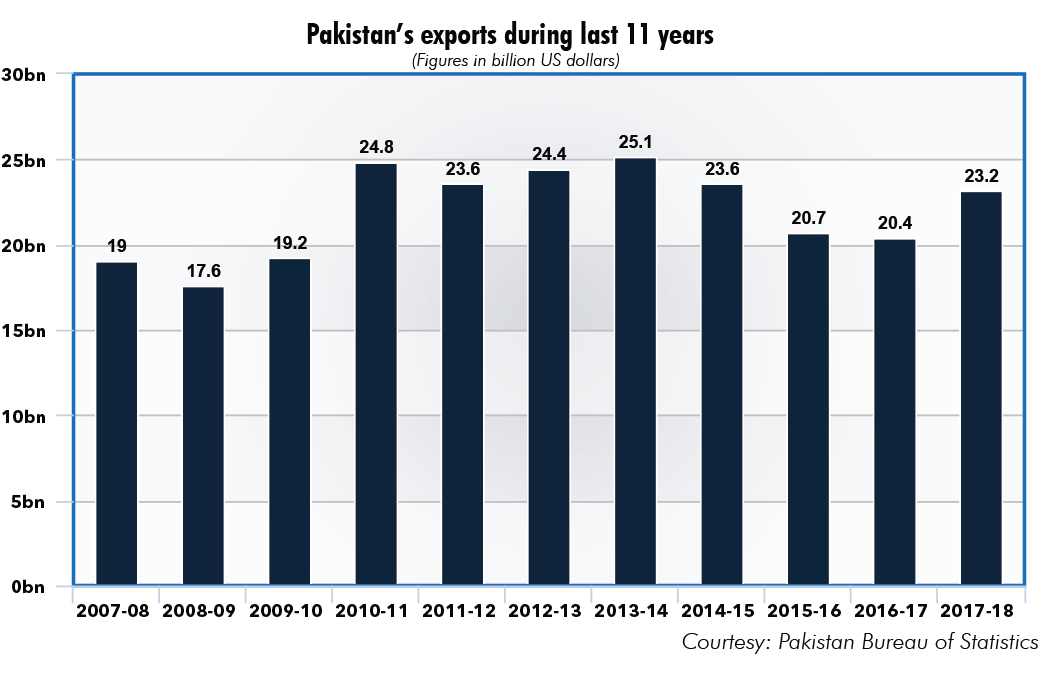 One cannot help but notice that amongst the top economic policymakers there is no one who either fully understands national exports or has direct hands-on experience in being practically involved with exports or for that matter has a focused exporting mindset.

The commerce ministry, unfortunately, one fears is too closely aligned with the PBC (Pakistan Business Council) – the big boys of the industry – and so far has been merely concentrating on one side of the external account equation: Imports. One can understand the concern of de-industrialization in Pakistan and how some of the previous poorly thought-through trade agreements (with countries like China, Indonesia, Thailand, Turkey, etc.) are hurting domestic manufacturing and increasing imports.

The thing is that this is yet another policy misjudgment by the PTI government where it is apparent that it hadn’t done its homework before assuming office.

The government had a real need to quickly clamp down on unnecessary imports – in fact, to retard the pace of imports per se in the economy. However, what the government forgets is that imports reflect only one side of the equation.

Simply tweaking trade agreements or restricting imports may work initially, but these are not long-term solutions. Instead, balancing external account merely through the import window will on the contrary end up being counterproductive for the economy in the long run.

Well agreed that though there has undoubtedly been much rhetoric by the present economic managers on how they consider export to be a key growth driver of the economy and that they would like to focus on increasing it, the trouble is that in today’s competitive world, increasing exports is a science that requires expertise.

The government had a real need to quickly clamp down on unnecessary imports – in fact, to retard the pace of imports per se in the economy.

As pointed out above, the present team appears clueless since they neither have the requisite experience in the field nor do they understand the nuances of a modern-day export industry.

A simplistic route by way of devaluing the currency will not do, and this is becoming quite obvious by now: Post-devaluation, Pakistan’s exports have posted a mere 1.9% increase over the eight months from July ’18 to February ’19, and in fact, decreased 1.78% in January’19 over December ’18. 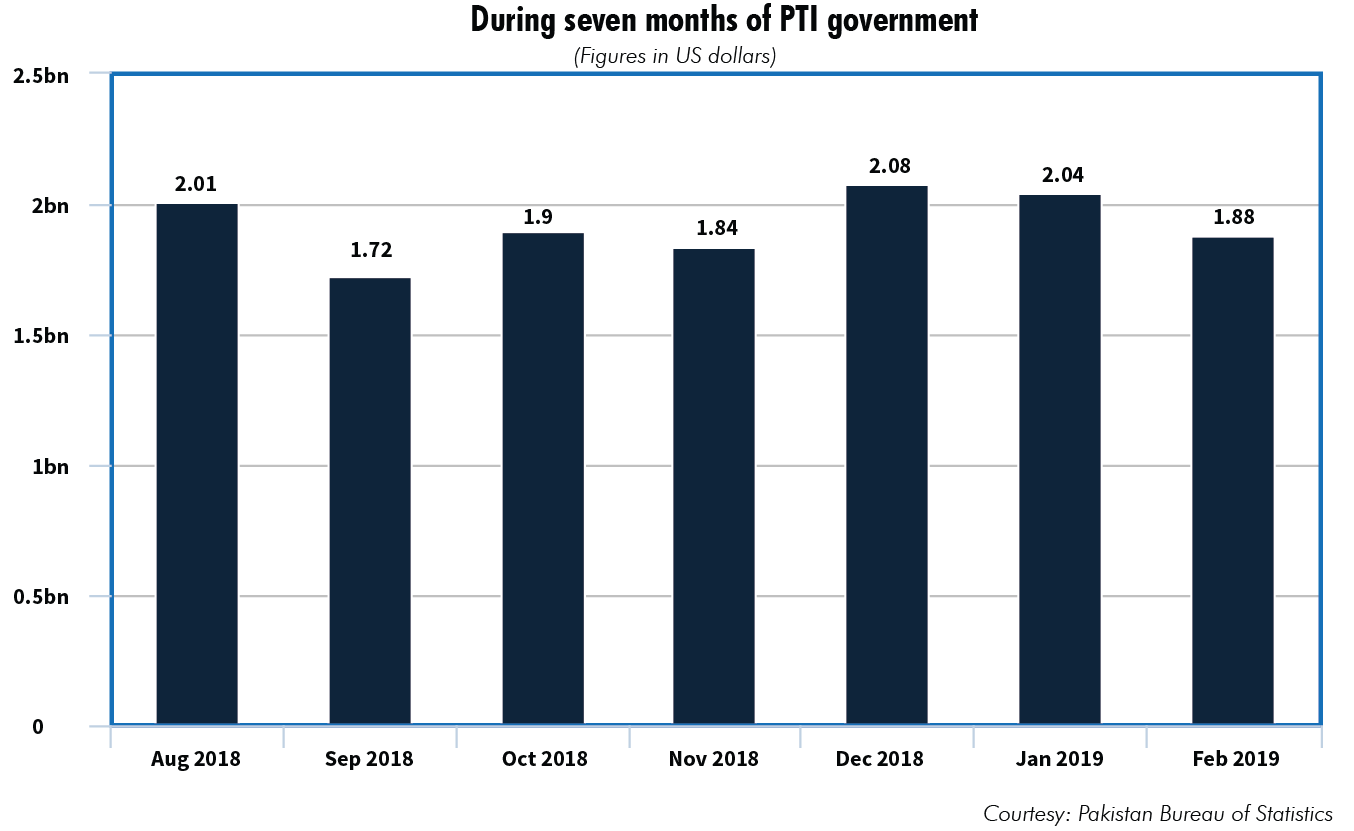 The thing is that when we closely study the global export miracles over the last five decades, we learn that a sustainable increase in exports primarily comes through a stable currency and not the other way round. Without going into the details of its reasoning for now, in our case also the absence of any meaningful growth in exports through Rupee’s devaluation was only writing on the wall.

With no real accumulated export surplus in hand and an industry eroded by the damaging policies of Mr. Dar, at best the need was for a devaluation of only about 10% (not 32%), that perhaps also to arrest the on-going decline in exports & to correct any immediate gap in operational competitiveness.

So the question arises here that what then is the way forward to bring about a significant increase in Pakistani Exports?

The answer lies in learning from our history of exports. The only time that Pakistan saw exponential growth in its exports was a period of the early 1980s to early 90s when successive governments of Zia, Benazir, and Nawaz Sharif saw to it that to capture international markets the exporting industries need to benefit from the following:

Not only will the government need to revisit the above to see where changes are required in order to rekindle interest in exports, but to also restore the entrepreneur’s confidence – the current mistrust between the businesses and governmental institutions is by all accounts the worst since the 1970s nationalization.

Similarly, in today’s data-rich world we can quickly determine via IT which categories to support, where to focus on skill development, how and where to tweak existing FTAs, precisely what new products to launch, what specific subsidy is required and where, what kind of guidance to give our exporters to achieve optimum price points, and which markets to target.

Finally, if the government is still serious about arresting the present economic decline, it needs to defend its currency and not allow the Rupee to sink further. There exists no empirical evidence (or data) to establish a real correlation between devaluation and sustainable growth in a country’s exports.

The stories of successful exporting countries climbing the value-added chain over the last decade come out as being no different. The WTO study on value addition (2008) points to a stable currency environment as one of the main pre-requisites to a sustainable value-addition drive in an economy.

All we need to do is to learn from the global economic history on merits and demerits of high currency devaluations and implications of a falling currency on sustainable exports, investment (both domestic & FDI), real growth, value addition, debt trap, inequality and most of all, on poverty. Already, there is a wave of inflation in the economy, threatening to become double digits by as early as April 2019.

If the government is still serious about arresting the present economic decline, it needs to defend its currency and not allow the Rupee to sink further.

Net disposable income has significantly declined, and with Central Bank’s interest rate at 10.25% (threatening to rise further), the real effective borrowing rate for the SME (small and medium-sized enterprises) sector is touching around 17 to 18 percent – none of which can be good for business.

No need to reinvent the wheel, closer to home, the new Asian tigers like China and Bangladesh have likewise managed a surge in their exports during a stable currency period and not through any abrupt devaluation measures.

And by the way, the new emerging champion around the block is likely to be Myanmar – A country many economic pundits had simply written off till only a few years back; and its recipe: The Bangladeshi and the Taiwanese exporting models!

Dr Kamal Monnoo is a political analyst. He is honorary consul general of the Czech Republic in Punjab and a member Board of Governors of Islamabad Policy Research Institute. He is author of two books ‘A Study of WTO’, and ‘Economic Management in Pakistan.’ He can be reached at: kamal. monnoo@gmail.com.

Nabeel Qadeer - 24 April 2021
Author and life coach explores PTI's evolving journey to power and its successes and failures in government so far. He argues that if PTI is to be voted in again, it will depend upon the tangible opportunities created for the masses.

Why Regionally Competitive Energy tariffs are needed for textile sector!

How Engineers, Designers and Architects fought the pandemic

The Pendulum swings on Pakistan relations with India

Islamabad Security Dialogue: Reaching out to the World

Balochistan: The Decade Ahead

Lawyer’s Movement: How it transformed Pakistani politics and society