What is the role of the ICJ

The International Court of Justice (ICJ), also referred to as the World Court, is the principal judicial organ of the United Nations. Established in June 1945 and started working in April 1946, it is based in Hague, Netherlands. It was the successor of the Permanent Court of International Justice (PCIJ), which was established by the League of Nations in 1920, both of which were superseded after World War II by the UN and the ICJ.

The ICJ comprises of 15 judges, who are elected for nine-year terms by countries through the Security Council and the General Assembly. To ensure continuity of the court five judges are re-elected every three years. No state may have more than one national as Judge on the court.

The hearings were held from 3-6 April, 2000, and the court declared, by a vote of 14-2, that ‘it had no jurisdiction to adjudicate upon the dispute brought before it by Pakistan against India.’

Judges are meant to perform their job impartially and without prejudice to any other country; however, if there is a case involving two countries in which one member has a judge on the court, the other country has the right to select an ‘ad hoc’ judge of its own nationality to hear the case, in this situation there will be 16 judges hearing the case.

What does it do

submitted to it by states and giving advisory opinions on legal questions referred to it by UN organs and its specialized agencies. All members of the U.N. are party to the ICJ statute.

The passengers were released unharmed, but the aircraft was burned down at the airport. In reaction, India imposed a flight-ban over its airspace to all Pakistani flights.

However, in contentious cases of jurisdiction, the ICJ can only give a binding ruling between states that agree to submit to the decision of the court. The court may acquire jurisdiction from tacit consent – such as if the respondent pleads on the merits of this.

Many states have modified their declarations to remove the Court’s jurisdiction over some issues. Australia in 2002 revised its declaration to exclude disputes on maritime boundaries; thought to have been done in anticipation of an impending challenge on the matter by East Timor.

AIM: Settle international disputes in a peaceful manner between states.

Pakistan has been in front of the ICJ five times including the latest for the Jadhav:

August 30, 1971: APPEAL OVER THE JURISDICTION OF THE ICAO COUNCIL (INDIA v. PAKISTAN)

On January 30, 1971, Hashim Qureshi and Ashraf Qureshi – belonging to the National Liberation Front – a Kashmiri separatist group – hijacked an Indian passenger aircraft. The plane which was on its way from Srinagar to Jammu, IoK was flown instead to Lahore, Pakistan. 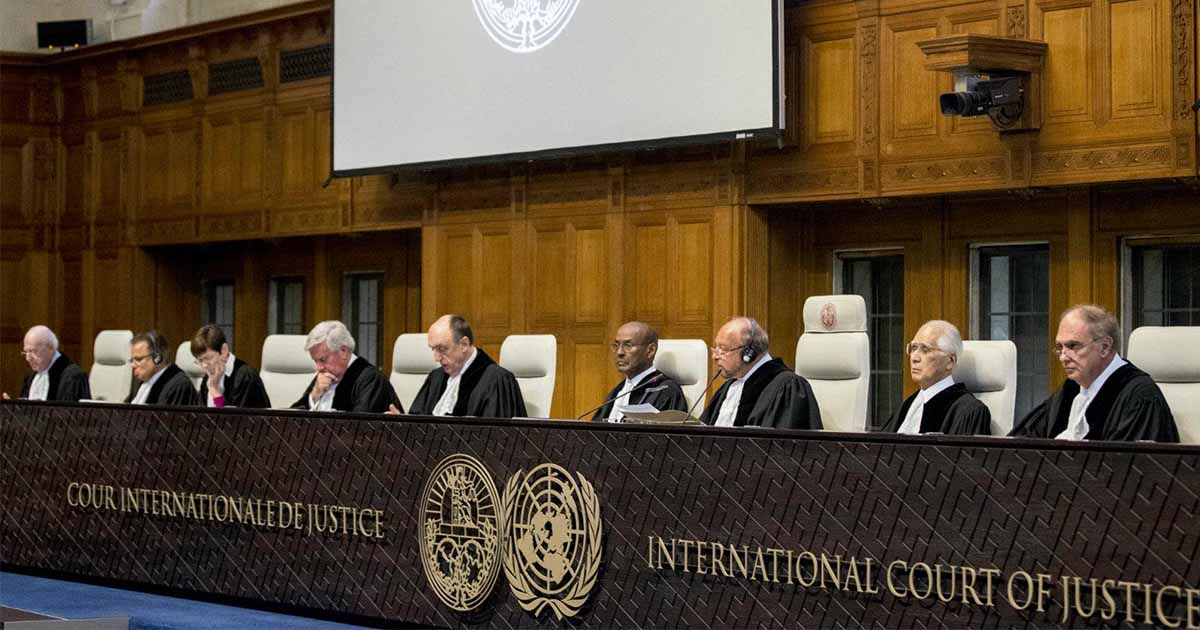 The passengers were released unharmed, but the aircraft was burned down at the airport. In reaction, India imposed a flight-ban over its airspace to all Pakistani flights. It occurred during a crucial period in which West Pakistan needed the air corridor to maintain connections with a troubled East Pakistan (now Bangladesh) during the 1971 civil war.

The International Court of Justice  ICJ, also referred to as the World Court, is the principal judicial organ of the United Nations.

However, final decision on the case did not come until August 18, 1972; by 14-2 votes, the ICJ determined that the ICAO Council did have jurisdiction to hear Pakistan’s claim. However, by this stage, the war was over, and an independent Bangladesh had been created.

Subsequent publications by Indian intelligence officials have exposed the lead Kashmiri hijacker to have been a double agent working for the Indian BSF and the hijacking as a RAW operation plan to restrict access to the air corridor by West Pakistan as India helped the insurgency in former East Pakistan.

Result: India loses appeal over the matter of ICAO Jurisdiction; however, Pakistan has already lost its civil war.

When the Pakistani troops stationed at East Pakistan – surrendered on December 16, 1971, around 90,000 prisoners of war (POW), many of whom were civilians, were taken by India. Following the Simla Agreement of August 2, 1972, all were to be released. Pakistan became worried that India proposed to hand 195 soldiers over to Bangladesh, who would try them for war crimes.

Pakistan took its concern to the International Civil Aviation Organization a specialized agency of the UN which codifies the principles of international air navigation.

On May 11, 1973, Pakistan took this concern to the ICJ. India responded that there was no legal basis for the Court’s jurisdiction. However, before the pleadings formally began Pakistan informed the Court that it expected to start negotiations with India and requested to postpone further consideration of its request to facilitate the negotiations.

When talks concluded under what is known as the Delhi Agreement of August 28, 1973, Pakistan requested the Court to halt proceedings. On that account, the case was discontinued by the ICJ in an Order of 15 December 1973.

On August 10, 1999, a fighter jet (MiG 21) of the Indian Air Force shot down Atlantique – a non-combat, maritime patrol aircraft of the Pakistan Navy. The plane was shot over the Rann of Kutch, and crashed almost 120 miles southeast of Karachi, killing all 16 officers of the Pakistan Navy, occurring one month after the Kargil conflict had ended and no hostilities existed between the two states.

Pakistan took its concerns to the ICJ on September 21, 1999. It argued that India’s shooting of the unarmed surveillance aircraft was a violation of its international obligations. Pakistan demanded reparation for the loss of the plane and compensation for the heirs of those who were on-board.

The Republic of Marshall Islands, in the north Pacific Ocean, had been under the U.S. administration since WWII. It achieved full sovereignty in 1986 and became a UN member in 1991.

According to Pakistan, it was an unarmed plane on a routine training mission and India committed a breach of international law by its incursion into Pakistan’s airspace. It asserted that debris fell on Pakistan’s side showing that there was no violation of Indian air space. India took the plea that the ICJ did not have jurisdiction.

Over the matter as in 1974, in India’s declaration of acceptance of ICJ jurisdiction, India had specifically made a Commonwealth Reservation, stating that ICJ will not have jurisdiction for claims brought against India by other Commonwealth countries.

The hearings were held from 3-6 April 2000, and the court declared, by a vote of 14-2, that ‘it had no jurisdiction to adjudicate upon the dispute brought before it by Pakistan against India.’

The Republic of Marshall Islands, in the north Pacific Ocean, had been under the U.S. administration since WWII. It achieved full sovereignty in 1986 and became a UN member in 1991. Due to its remote location and sparse population, the U.S. had conducted as many as 67 nuclear tests on the islands. Consequently, it became the ‘most contaminated place in the world.’

Simla Agreement of August 2, 1972, all were to be released. Pakistan became worried that India proposed to hand 195 soldiers over to Bangladesh, who would try them for war crimes.

The country initiated legal proceedings against all eight nuclear states (India, UK, Pakistan, USA, France, China, Israel, and Russia) on April 24, 2014, for breaching international law obligations relating to cessation of the nuclear arms race and nuclear disarmament. Only three countries, the UK, India, and Pakistan appeared in front of the ICJ.

On July 9, 2014, Pakistan argued that the Court did not have jurisdiction in the alleged dispute and that the application was inadmissible. It also contended Pakistan was not a party to the NPT; therefore, it was not under any international legal obligation to enter into negotiations on nuclear disarmament.

The Court upheld the jurisdiction objection by 9-7 votes; thus the Court found no need to consider the other objections raised by Pakistan. Note aside: In case of India, it took exception to the compulsory jurisdiction on the basis of its 1974 reservation of ‘self-defense’ to the declaration under Article 36(2) of the ICJ Statute.

Urea exports: Massive opportunity for the economy of Pakistan

Urea exports: Massive opportunity for the economy of Pakistan

Magazine Desk - 8 July 2021
There is a need to recognize that locally manufactured urea can become one of the top exports of Pakistan without any additional investments by the industry, which can be an essential component for the government’s Vision 2025 which seeks to elevate Pakistan’s position from a lower middle income to an upper-middle income country by pursuing an ambitious, export-led growth strategy.

Afghanistan: Important Questions for the Future

Covid-19 response in India and Pakistan